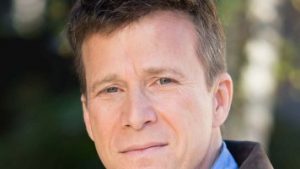 Steven Cooper, once upon a time an investigative reporter for Graham Media’s WKMG in Orlando, will be back on the station ever so briefly this week…as an author.

“WKMG was my work family for nearly 15 years,” said Cooper, who has lived in Atlanta since 2013. “I don’t know what it will be like being back as a guest on the news. That will be a new experience, and I’m looking forward to it. I’m extraordinarily grateful to WKMG for giving me some of the most productive and rewarding years of my career.”

Cooper’s guest appearance will be Friday morning at 9 am, when he will be interviewed by anchor Julie Broughton.

His new book, “Dig Your Grave”, is the second thriller to feature homicide detective Alex Mills and his pal Gus Parker, a reluctant psychic.