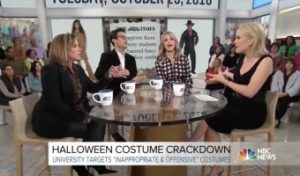 Megyn Kelly, desperately seeking to be relevant again, found herself on the receiving end of social media contempt Tuesday when she wondered aloud why blackface isn’t a proper Halloween costume,

Hours after she mouthed off, she sent a note of apology to NBC colleagues.

“Today is one of those days where listening carefully to other points of view, including from friends and colleagues, is leading me to rethink my own views,” Kelly said.

And so went the attempt to lock the barn door after the horse’s a** escaped.

Kelly had one of those pointless panels on her program which discussed a “crackdown” on Halloween costumes by political correctness.

Almost inevitably, the discussion on political correctness and Halloween ended up a discussion of the burning problem on not being able to use blackface as part of a costume.

Where the hell was HER neighborhood?

Are you telling us THIS was ok back on your block?

We’ve got a few decades on you, Megyn, and, even in our tiny lily-white working class town, such a thing would have gone over like a lead balloon.

Rivers said that “normal people know” where the line is, and Hager added that “there are limits to how far you want to go because you’re making people feel bad.”

Now this was an all-white panel. We wonder how Kelly would have handled the topic if oh, say Hoda Kotb, or Al Roker were sitting at the table.

But she’s sorry she ever brought it up.