Make that the FOUR Dumbest People On Television. 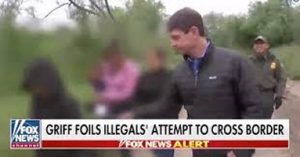 Tuesday morning, the denizens of the “Fox and Friends” kurvy kouch sent out intrepid reporter Griff Jenkins to hide in the bushes at the border near McAllen, TX.

His mission? Seek out and confront migrants trying to cross the border.

“We laid in the bushes in wait, and we busted one of those smuggling operations,” says the Fox News reporter, before the video pans over to him in a bush watching a migrant family in a raft attempting to come to America for safety.

“We’ve been out here in the bushes waiting to witness one of these crossings,” he added. “You can see they’ve got a family in a raft.”

“Excuse me, sir, were you trying to cross into America illegally?” causing the family to avoid heading towards him.

Jenkins then says: “We seemed to have foiled this attempt, but officials tell us that he’s probably just going to look for another spot.”

It has to be seen to be believed.

For another look at how the migrant issue can be covered – responsibly- check out the video of the day in the right-hand column.