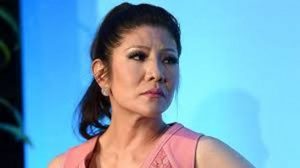 For former “Big Brother” and “The Talk” host, as well as sometime-journalist Julie Chen….Moonves, it just gets worse.

Both of her jobs melted away when her husband, Leslie Moonves, was deposed as CEO of CBS, Inc, having been caught up in both #MeToo allegations and leading a failed coup against majority stockholder Shari Redstone.

Now, a book tour that was supposed to promote her children’s book “When I Grow Up”, has been unceremoniously cancelled.

“Julie was scheduled to appear on all the CBS programs to plug her book starting with Gayle King on the morning show and ending with Stephen Colbert’s night show,” an anonymous source revealed.

Could it BE any more awkward?

Now that long ago, not one of those CBS shows would have dared turn down her booking request.

But that was when Les was in charge.