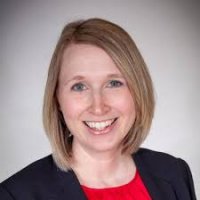 Moines, IA in December, his replacement will be Allison Smith, currently the number two at sister station WLWT in Cincinnati.

She’s held that position for the past four years.

When she takes over at KCCI, she will be the fourth news director in the station’s 63 year history.

It’s full circle for her.

Smith, after graduating from Drake University. began her career at KCCI as a producer while earning an MBA at Iowa State University.