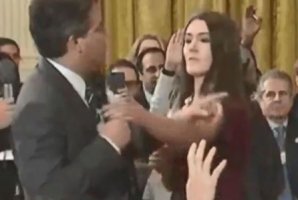 The war of words between the Administration continued Thursday as CNN’s vp of Communications Matt Dornic slammed WH Press Secretary Sarah Sanders of using a doctored video to justify the yanking of the press credentials of CNN’s Jim Acosta.
“Absolutely shameful, @PressSec,” he tweeted. “You released a doctored video – actual fake news. History will not be kind to you.”

Was the tape doctored? And, if so, who was the doctor?

The video retweeted by Sanders appears to have originated from InfoWars, the right-wing conspiracy theory site run by performance artist Alex Jones.

When the video zooms in to illustrate the moment Acosta’s hand contacted the woman’s arm, it appears to be sped up in an attempt to make it look worse than it was.

None of this gets Acosta’s press credential restored.

And none of it reflects well on anybody.

Our advice for journalists: Don’t take the bait. It simply becomes more of a distraction.