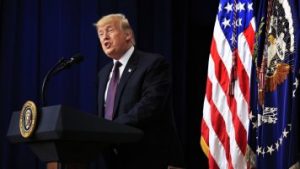 The “LA Times” uses the doctored video of Jim Acosta’s tug of war with a White House aide to launch a lengthy piece on similar events over the past couple of years in this Administration and a call to name those incidents…”Propaganda.”

Certainly that is the word that comes to mind when one hears a White House spokesperson using the term “alternative facts” as if such a thing really existed.

There might be differences in interpretation and in the degree of importance of a particular event.

But facts are facts.

Changing the transcript of a press conference to omit flubs, editing a video to imply something approaching an assault took place, doctoring poll numbers – those are creating an alternate reality.

They were all cases of purposefully manufactured narratives, disseminated from the highest levels of government, sometimes with the help of adversary nations, to sway public opinion, quash dissenting voices and consolidate power.

Propaganda is something most of us read about in history class and wondered how people were so easily duped. Certainly they saw through such obvious attempts to manipulate? Its use dates back well before Nazi Germany and Cold War Russia and stretches up to present-day China, Saudi Arabia and North Korea. It arrives in the form of fake Facebook accounts created abroad and meant to influence our elections, or surveillance video from a Turkish embassy where Saudi operatives sought to cover up a murder by posing as their victim.

It’s the mark of a country we never wanted to be: a nation that divides its own people and pits them against one another. And it never ends well.

There’s of course nothing new about politicians evangelizing their version of events or extolling their successes. George W. Bush gave the “mission accomplished” thumbs up shortly after the U.S. invaded Baghdad, though the mission was predicated on faulty intel and the war would drag on for over a decade. Barack Obama graciously accepted the Noble Peace Prize as the drone strikes he ordered killed civilians in Pakistan.

It’s taken the media the better part of three years to actually use the word “lies” when it reports on some of the more outrageous assertions emanating not only from inside the Beltway but from state capitals across the country.

Deploying the word “propaganda” is an even bigger step.