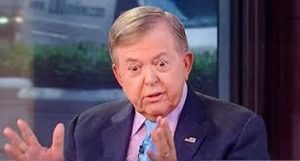 The judge’s decision in the Acosta/CNN vs. White House pushed the once-rational Lou Dobbs ever closer to the edge.

This was barely 24 hours after Dobbs, on his Fox Business program, made this utterly baseless claim:
“We’re watching millions of illegal immigrants cross our borders and many of them voting in the past election…a couple of weeks ago, and having an immense impact. If there, as Yale and M.I.T. say, 20 to 30 million illegal immigrants already in this country, you know what that means for the districts of the U.S. Congress and the influence that they’re giving to, for example, the state of California, Illinois, New York.”

Larry Kudlow getting that White House economic advisor job really appears to have sent Dobbsy over the edge.

We’ll just leave a link to a New York Times survey for which law enforcement and election officials throughout the country were contacted following the 2016 election, indicating only two potential cases of votes being cast by noncitizens.

That was out of more than 137 million voters.
Two votes.