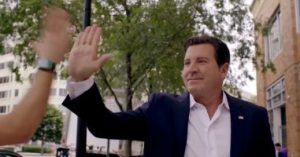 Eric Bolling, the former Fox News program host appears to have found a compatible home with the newly-formed Blaze Media, the combination of CRTV and Blaze that rescued the beleaguered Glenn Beck’s diminished dream of a media empire.

Bolling, who launched his new streaming program “America” on CRTV this past July 4th, has been extended through 2021.

With the signing, Bolling is now the senior political anchor of the new enterprise.

“I am thankful for and have loved connecting with fans from around the nation, who have helped make ‘America’ must-see TV. BlazeTV is building a conservative powerhouse of established marquee names and tomorrow’s up-and-coming stars. I welcome more voices to join me at the nation’s ‘go-to’ network for conservative opinion,” Bolling said as he swiped at his former employer.