Take a former NPR executive fired last year over sexual harassment allegations stretching back decades, and a former Fox News executive fired over a column widely panned as racist and homophobic and put them in charge of a new digital news startup.

What could possibly go wrong? 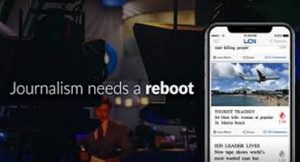 We have a shot at finding out as former NPR news boss Michael Oreskes and former Fox News executive editor John Moody come on board something immodestly called LaCorte News.

The site is expected to soft launch before the end of January.

LaCorte will be the site’s CEO, and Moody will serve as editor in chief.

Oreskes doesn’t have a formal title, but LaCorte described him as sitting on the site’s editorial board and said he’d been joining regular phone calls for about six months, with compensation in stock.

LaCorte says the histories of both men doesn’t bother him so much as his feeling they were victims of hasty judgement in the #MeToo era.

That said, he does admit, he couldn’t have afforded either of them if they hadn’t been damaged goods.

Another plan to “save journalism.”

Just what we wanted for Christmas.