A somewhat uncharitable viewer of Tribune’s WGN undoubtedly thought [s]he was being clever when sending morning meteorologist Morgan Kolkmeyer side-by-side pictures of her and 70’s teen heart-throb Shaun Cassidy to point out the uncanny similarities between the two.

Sport that she was, Kolkmeyer tweeted out the picture saying, “Gotta be honest though…they’re not wrong.” 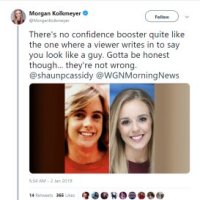 Cassidy himself weighed in..

“I think you’re much prettier, but your mother might disagree.”

Then Morning News anchor Robin Baumgarten tweeted something that, in effect, put her in the “mom” role here.
“I have never been jealous of a millennial….until now.#dadooronron” she said.