This must be a first….taking the nightly newscast on the road to cover dysfunction.

And that is exactly what NBC News did Wednesday night. 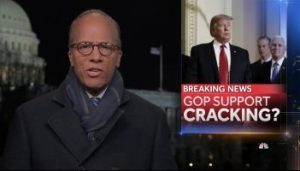 Anchor Lester Holt was in the field outside the Capitol to tackle government’s inability to govern – or even act adult.

Holt set the tone right from the get-go:
“Good evening. We have come here to frame the crisis rocking America, not the one the president speaks of at the Southern border but the crisis of dysfunction here in Washington that has ground so much of the government to a halt — and the crisis around kitchen tables where families try to figure out come Friday when a government paycheck doesn’t arrive.”

We’d like to think that if all the nightly news anchors were to be live out in the field at various locations in Washington to harp daily on the topic, it might force the Administration and Congress to get serious about actually running the country.

We’re betting someone must have been watching Holt, though, and took notice of the alternately scolding and disgusted tone of the newscast. 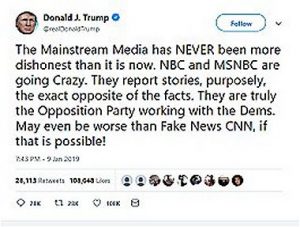 We didn’t say it would force more adult behavior, did we?