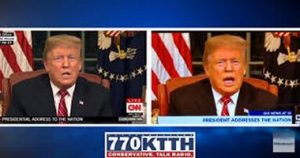 Our bonehead of the day award goes out to the un-named editor at Tribune’s KCPQ in Seattle, WA who thought it would be a good idea to do some creative editing on the station’s story of Mr. Trump’s Tuesday Oval Office address.

The video was altered to make it look as if Trump was sticking his tongue out languidly between sentences.

In addition, the colors in the video look more saturated, leading Mr. Trump’s and hair to appear more orange.

“This does not meet our editorial standards and we regret if it is seen as portraying the president in a negative light,” KCPQ news director Erica Hill wrote in an emailed statement early Thursday.

Hill also confirmed on Thursday that the station investigated the incident and fired the editor involved.

In the video broadcast by the station, it appears that Trump lets his tongue hang out, resting it on his lower lip for an unusually long time.

What hasn’t been established is whether the employee created the doctored video or just allowed it to go on air.

And, of course, it lives on, courtesy of the Internet.

In any event, the editor deserved dismissal.

It’s tough enough on real journalists these days without some irresponsible jackwagon making things worse with a crappy joke.