While the area around Cambridge Bay, in the far northern reaches of Manitoba, Canada was dealing with temperatures ranging from -2° to -25° earlier this week, Cambridge Bay itself was burning up at more than 123 QUINTILLION degrees.

At least according to a map used by Disney’s WABC in New York during a “Facebook Live” presentation. 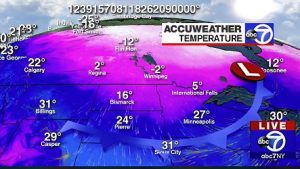 As if Facebook didn’t have enough problems with trying to screen out “fake news.”

Wanna see how it all played out?