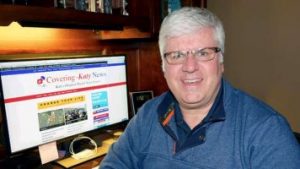 Last year, Spellman told mikemcguff.com that if it happened overnight in Katy, his goal was to have it posted when people wake up.

“When I moved to Katy nine years ago it was clear that this community of 300,000 plus people had no news outlet that was aggressively covering the news,” he told me at the time. “We were loaded with magazines that were doing lots of fluff but no one, not even the newspaper of record, was covering news in any meaningful way.

He set up a paywall for his site, but the end of his venture and his dream is in sight.

Spellman is closing “Covering Katy” down at the end of next month.

A sad, but not surprising, ending to what once seemed a promising enterprise that would appeal to locals.

Back in 2010, we moved to a southern town to help launch the brainchild of a veteran local tv executive – a hyperlocal news site.

Dreams abounded as we set about the work of learning the intricacies and idiosyncrasies of WordPress while simultaneously building a network of sources for both original reporting and aggregated content.

The local executive split as soon as a tv group dangled a general managership at him, and it was left to two of us to press on.

Evidently, the executive thought somehow the revenue would magically appear.

You know how this story ends – after seven hectic, but glorious, months.

At least Spellman had nine years with his site.