All the Emmys, Dupont, Awards, Reporter of the Year recognitions and other industry accolades won’t shield you from repercussions if you have a problem that might have a sexual component. 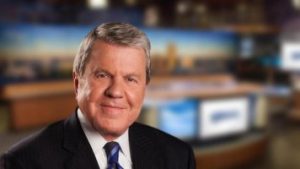 Crabtree’s revelation came at the end of the 6 PM newscast on WRAL, where he’s held forth for the past 25 years as anchor and reporter.

Crabtree said his loss of standing in the church was the result of an inappropriate relationship that violated church rules.

He also posted a mea culpa on the station’s website:
You may know that I am a member of the clergy in the Episcopal Church. On Friday, the church announced I have lost that position because I violated church rules.

I accept the decision. My actions were unacceptable. I apologize.

My faith remains strong. I seek God’s forgiveness. I hope that, in time, I might earn yours.

Crabtree, who is divorced with two adult daughters, was an ordained deacon at St. Michael’s Episcopal Church in Raleigh.

Station management said Crabtree’s status at the station is unchanged, calling the issue “a personal matter that is between him and the Episcopal church”.