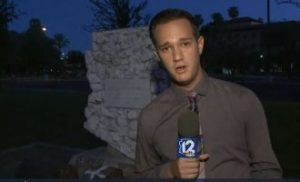 KPNX (maybe, maybe not) reporter Bryan West was supposed to be released from jail Thursday following his recent conviction and sentencing for some alcohol-fueled hijinks last August in Phoenix.

West employment status with the Tegna station is unclear at the moment.

Since his bio has been removed from the station’s website, it’s probably a good bet his days at the station are over, but nobody at the station is confirming or denying anything about West at this moment.

This is not West’s first controversy with the station.

We reported back in August of 2017 when West found himself in the middle of a questionable story about the vandalizing of a Confederate memorial at the Arizona State Capitol.

The vandal in that incident showed up at the monument at the same time as a news crew and the news team’s vehicle appeared to  light the monument so the vandal could do his thing.

All of it was captured on security cameras.