Jim Hummel, host of the long-running “A Lively Experiment” on Rhode Island’s PBS outlet appears to have survived the appearance of a picture of him in blackface that surfaced on , where else? – Facebook-  late last year. 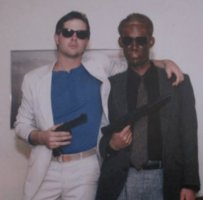 The picture, from 1986 when Hummel was a 26-year-old reporter with the “Providence Journal,” shows Hummel standing next to another man holding a fake gun.

According to Hummel, he was attending a Halloween party dressed as Tubbs from the TV show “Miami Vice,”  who was played by African-American actor Philip Michael Thomas.

Hummel said that as a northeasterner, he was unaware of the potentially racist connotations of blackface at the time.

The public broadcaster has his back.

“The photo in question was taken of a costume event more than 30 years ago,” RIPBS President David Piccerelli said in an email. “In the years since then, Jim Hummel has built and earned his reputation as an award-winning investigative journalist in print and television, as well as being a person of integrity and well-respected member of the community.”

Hummel acknowledges that the photo looks “horrible” and echoed the station’s statement of support.
“The body of my work, I think, is more reflective of the person I am,” he said. “It’s a pretty big leap to say that that picture is in any way reflective of my values and the work that I’ve done over the years. I just don’t think there’s a connection.”