Worst-kept secret and the shame of NBC Sports. 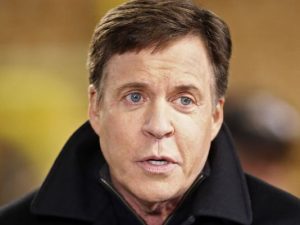 Yanking Bob Costas from NFL coverage was about the most craven thing an organization in thrall to the National Football League could do.

Essentially forcing him out of the network was even worse – but not a big surprise.

What was Costas’ sin?

The sin of committing actual journalism, which has little or no place when it comes to sports.

And now he is speaking out about his departure from NBC Sports last year after nearly 40 years.

It was the year he was fired from NBC’s Super Bowl coverage because of his journalism regarding the NFL’s concussion problem.

Over the years, Costas had become more outspoken about the concussion dangers faced by NFL players at a time when the NFL was desperately trying to downplay the problems of CTE and sweep it under the rug.

And that posed problems for NBC which, at the time, was trying to add a Thursday night package to its soon-to-expire NFL contract.

Billions hung in the balance.

In 2015, Costas was invited to a November screening of “Concussion” in Hollywood. He was moved by the film and even thought Will Smith might earn an Oscar nod for his performance as Dr. Bennet Omalu, the neuropathologist who had ignited the NFL’s concussion crisis a decade earlier by first positing that former players had died with a brain disease caused by football.

NBC was scheduled to air Indianapolis at Pittsburgh on Dec. 6. The movie was set largely in Pittsburgh, and former Steelers great Mike Webster was a major character in the story.

“It was a natural lead-in,” Costas told Outside the Lines. “I thought that the movie would make an impact, and I thought this was a way not only for NBC to acknowledge it, but to get out in front of it.”

Costas typically wrote his essays on the fly on game day, sometimes even as the first quarter of the Sunday night matchup was under way. This time, though, he wrote it in advance to give his bosses an early look, recognizing it could create problems.

The essay, which has never been made public but was provided to Outside the Lines, began with a description of Omalu as “the neuropathologist who clearly demonstrated what just about everybody now understands — but which for years the league denied: There is a direct and often tragic link between football and brain damage.”

Costas says he sought to mitigate the potential embarrassment for the NFL by highlighting its efforts to improve player safety. “I purposely toned it down,” he says.

He wrote, “To its credit, the NFL now has put millions into medical research and the possibility of improving equipment. They have instituted rules changes aimed at making the game safer, awareness programs aimed at youth football, and stricter head trauma protocols, which, even if they don’t always work, at least appear to be a step in the right direction.”

But Costas didn’t hold back: “Even as the ratings rise, so, too, does a certain ambivalence. Because as much as we may try to push it into the background, there’s a kind of Russian roulette going on on the field tonight and on our television screens throughout the fall and winter, since we know that for all the game’s appeal, many of its participants will one day pay dearly for their part in our national obsession.”

“I remember the reaction almost verbatim. They said, ‘This is a very well-written piece, wouldn’t change a comma. We can’t air it.”

Costas says he asked why.

“We’re in negotiations with the NFL for Thursday Night Football,” he says he was told.

“It was at that point that I realized that this was an untenable situation for me,” he says. “I knew my days there were numbered.”

He delivered the coup de grace at a University of Maryland symposium in late 2017, telling a crowd of more than 400, “The issue [in sports] that is most substantial — the existential issue — is the nature of football itself.”

He then went on a nearly one-and-a-half minute riff about football and brain damage that was punctuated by this statement: “The reality is that this game destroys people’s brains — not everyone’s, but a substantial number. It’s not a small number, it’s a considerable number. It destroys their brains.”

Two months later, he was removed from coverage of the 2018 Super Bowl – a game that was supposed to be his swan song as a sportscaster to football