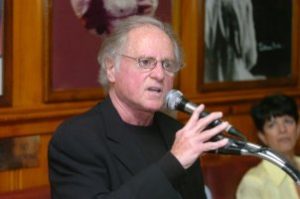 If you had retired sportscaster Warner Wolf leading a quiet life after a long, and successful tv/radio career…..YOU LOST!!!!

The man who coined the catchphrase “Let’s go to the videotape” during his legendary sportscasting career was caught on tape defacing a sign at his gated community in Naples, Florida.

The 81-year-old Wolf apparently had a long-standing objection to the word “Plantation” in the named of the community “Classics Plantation Estates.”

When his objections went ignored by the homeowners’ association, he evidently decided to take action himself last week – removing the word from the sign at the complex entrance.

He ended up being was booked for causing criminal mischief that resulted in more than $1,000 in damage — a felony.

So far, Wolf isn’t talking about the incident.