Some advertisers are starting to put some distance between themselves and the two latest centers of controversy at Fox News. 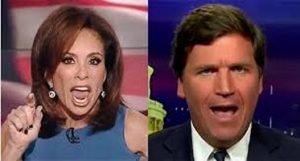 The programs fronted by Tucker Carlson and Jeanine Pirro  have seen some advertisiers heading for the door following recent controversial remarks.

Fox is gamely standing behind the duo as another one of those ill-advised sponsor boycotts ramps up.

The support comes at an awkward time as the company is playing buyers with drinkers and anything else that works to gain their advertising dollars.

At least four advertisers have pulled ads from Pirro’s show since she suggested during a segment on “Justice with Judge Jeanine” last Saturday that Rep. Ilhan Omar’s (D-Minn.) Islamic beliefs put her at odds with the Constitution.

Carlson has been under the gun since controversial remarks concerning women he made nearly a decade ago were discovered by Media Matters and gleefully distributed as quickly as possible.

He’s already lost Sheex Bedding company, which was the show’s third largest advertiser, according to data from iSpot.tv.

Other sponsors are considering their options.

Now for those of you who think sponsor boycotts are a good idea – first some cold water.

The sponsors aren’t going away – the spots are being shifted to other dayparts.

So no one’s losing money.

Let us posit that you who support the damned things are big Rachel Maddow fans (not a stretch, we might add)

And Maddow says something that, say, oh the Media Research Center finds objectionable (they probably object to her saying “Good Evening” but….never mind)

So the MRC wages a sponsor boycott war.

And Andy Lack, not being made of the stern stuff that Fox News execs evidently are, folds up like a cheap suit and it’s “Bye-bye Maddow.”

Now it doesn’t seem like such a good idea does it?

And let’s face it – Carlson’s remarks, no matter the degree of their boneheadedness, are ten years old from guest stints on a morning radio show.

Why do they surface now?

As for Pirro, her mouthy spewings have been condemned by Fox even as the company says it will keep her on.