You can tell we’re getting close to May.

The sweeps stunting is ramping up. 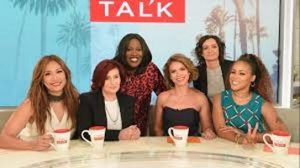 For instance, it’s “Be Nice To Your Local Affiliates” week on the CBS afternoon yakker “The Talk.”

The fun continues through next Monday as the guest list moves across the country.:

Oh, and the program’s co-creator and co-host, Sara Gilbert, announced yesterday she is leaving the show.

Another surefire boost to the numbers.

Quite the run-up to May.