Nearly 20 months after losing its long-time home at 1945 Allen Parkway to flooding during Hurricane Harvey, KHOU (CBS) has been broadcasting from its new permanent studios for few months. 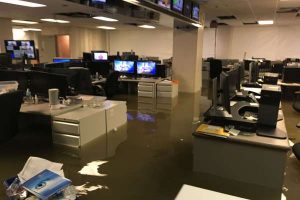 Following the hurricane, the station was relocated to a temporary location at the Melcher Center for Public Broadcasting on the campus of the University of Houston, with technical assistance coming from sister TEGNA stations across the country.

There was an official dedication last week.

On the ground floor, there are two studios: a news studio and a studio for the one-hour morning show, “Great Day Houston.” The area is dedicated to Susan A. McEldoon, the now-retired general manager who ran the station and kept the team together during the flood.

The news studio boasts an interview set, a high-tech visual wall behind the anchor’s desk that showcases seamless images and videos, a virtual studio video set with a green screen with chroma key technology, and more.

The station’s large red call letters (which hung on an outdoor tower at the Allen Parkway building for decades) have been restored, refurbished and proudly displayed on the ceiling from the entryway to the breakroom.

“These are iconic letters in Houston,” said executive news director Sally Ramirez.  “They mean a lot to us. We wanted to incorporate them into our legacy here.”

The letters were a surprise for the staff, many of whom consider it their favorite part of the new studios, Ramirez said. “We didn’t take pictures or socialize it until everyone saw it. So many people have come through, some with tears in their eyes.”

Another bright touch, the decor in the elongated open-concept newsroom has vibrant pops of color via furnishings and carpets, as well as in a colorful mural by local artist, Dual Streets, which simply reads, “Relentless.”