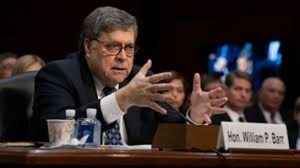 While MSNBC was delivering live coverage of Attorney General William Barr’s appearance before the Senate Judiciary Committee this week, it broke in several times to do some fact-checking.

Even anchor Brian Williams admitted it was unusual to interrupt and usually, networks are loathe to do so.

But was it the right thing to do?

During Wednesday’s hearing with Attorney General William Barr about the Mueller report, Senate Judiciary Committee chair Lindsey Graham said, “No collusion. No coordination. No conspiracy between the Trump campaign and the Russian government regarding the 2016 election.”

As Graham continued to talk, MSNBC split the screen to show anchor Brian Williams, who told viewers, “We’re reluctant to do this, we rarely do, but the chairman of the Judiciary Committee just said that Mueller found there was no collusion. That is not correct. Nicolle Wallace, the report says collusion is not a thing they considered. It doesn’t exist in federal code.”

Then MSNBC political analyst Nicolle Wallace ripped into Graham, including this comment: “I’m sorry, Lindsey Graham, but your defensiveness is showing. To talk about everything that went into it and in the next breath distort it is a stunning, stunning mischaracterization of what the whole exercise is supposed to be about.”

All along, Graham continued to talk, although viewers could not hear what he was saying.

Should evasions, misleading statements and outright lies be fact-checked in real time?

Or should the event play out and let the fact-checking and analysis occur at the end of it?

If a network tells its audience ahead of time that it’s going to give a running commentary and/or do up-to-the-minute fact-checking, viewers know what they are in for. Otherwise, the expectation should be that viewers aren’t going to be disturbed.

This isn’t about whether or not networks should call out lies. It’s about when they should do so.

Because if they do it for one event such as the Barr appearance, should it become the norm for ALL events of this nature?