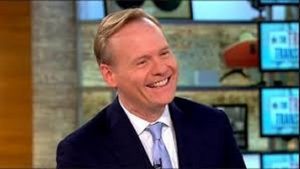 This week’s “CBS Evening News” will be anchored by John Dickerson, lately displaced from the “CBS This Morning” set and “60 Minutes”- bound.

You won’t be seeing Norah O’Donnell in the chair until later this summer.

Then, she will preside over a reboot of sorts as the newscast makes its move from New York to Washington, DC in the fall.

In the meantime, expect a parade of varying faces in the coming months as buffer anchors.

And on May 20th, a week from today, watch for the newly-revamped “CBS This Morning” with Gayle King joined by Anthony Mason (himself a “buffer anchor” prior to the Glor era) and Tony Doukopil.