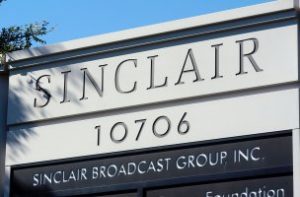 Certainly their shareholders are seeing visions of untold dividends, since Sinclair stock shot up 35% when the deal was announced.

But as for the banks Sinclair is expecting to pony up replacement loans for a $1 billion+ bridge loan that is part of the $9.6 billion deal…well not so much.

The sticking point is that Sinclair wants the loan secured by the Fox Sports it is acquiring.

The banks would like Sinclair to use some of their vast local tv station holdings as collateral.

“The problem is the numbers are declining,” a source said of the RSNs, which bring in $1.5 billion in adjusted earnings.

Sinclair, as always, wants its cake and eat it as well.

And when was the last time YOU expected banks to accept YOUR conditions for them granting you a loan?