Rachel Maddow has a new book on the way, due out in October 2019. 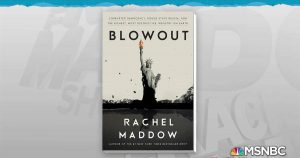 Maddow mentioned it to viewers earlier this week calling it a “dark, serpentine, riveting tour of the unimaginably lucrative and corrupt oil-and-gas industry.”

She says “it is a call to “stop subsidizing the wealthiest industry on earth, to fight for transparency, and to check the influence of predatory oil executives and their enablers.”

This is Maddow’s second book.

Her first entitled Drift: The Unmooring of American Military Power was published in 2012.