A San Francisco journalist whose equipment was seized in a police raid will get back his property, a police attorney said Tuesday at a court hearing, but that did not resolve larger issues surrounding the conduct of officers that alarmed the journalism world. 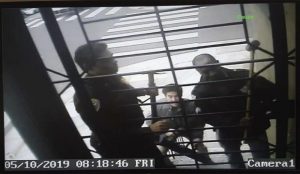 Authorities have said the May 10 raids of the home and office of freelancer Bryan Carmody were part of a criminal investigation into what police called the illegal release of a report on the death of former Public Defender Jeff Adachi, who died suddenly in February.

But media organizations across the country have criticized the raids as a violation of California’s shield law, which specifically protects journalists from search warrants.

City supervisors scolded police for quietly releasing the report to the press, saying it was an attempt to smear the legacy of Adachi, who frequently sparred with police.

An autopsy blamed Adachi’s February 22 death on a mixture of cocaine and alcohol that compromised an already bad heart.

San Francisco police have defended the action in which they seized computers, cellphones and cameras.