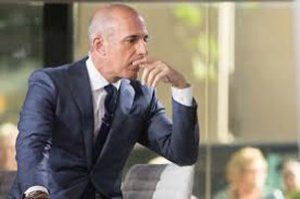 Conspicuously MIA from “The Today Show’s” self-absorbed celebration of 25 years inhabiting Studio 1A is Matt….um….let’s see…it’s right on the tip of our tongue…..oh yeah…Matt Lauer.

The revisionism of wiping Lauer from the history of NBC’s morning show is quite…well…Stalinist, we guess.

Melvin and Bush…but not Lauer, who joined the program in 2007.

Lauer, of course, was unceremoniously dumped in 2017 after allegations of “inappropriate sexual behavior in the workplace” and he’s been tabloid fodder ever since.