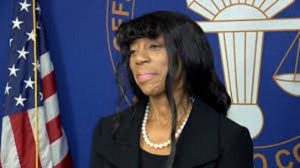 This is Marilyn Hite Ross.

Ross is the state’s attorney for Winnebago County, IL.

She got her job last November when her predecessor was elected to a judgeship.

Ross evidently doesn’t have a working knowledge of the First Amendment or her new responsibilities as the top law office in an Illinois County.

Shortly after taking office in December, she issued a new policy governing her interactions with journalists.

The policy dictates that reporters wishing to interview Hite Ross must submit their questions in advance.

If the interview is granted, any reporter who asks about something not on the pre-approved list will have his or her questioning terminated immediately.

She’s refused all requests to terminate this moronic and cowardly policy, taking it even a ridiculous step further by having a reporter removed from a news conference because the journalist asked a question not related to the event’s stated topic.

It reads, in part,

Your insistence that news organizations submit a written interview request, and especially the requirement to specifically identify potential questions and to provide the perspective of the story, makes your office an outlier among public institutions here and around the state.

Your refusal to answer what you consider “off topic” questions, culminating in the escorting of a longtime Rockford journalist from a press conference, borders on the ridiculous.

We believe no question to a public official in a public setting is “off limits.”

So far, no comment for the obviously underqualified Hite Ross.