As her discrimination lawsuit against former employer, Meredith Corporation and WSMV wends it way through the federal court labyrinth, former Nashville anchor mainstay Demetria Kalodimos is turning to what was a sideline during her anchoring days – creating documentaries and other programming. 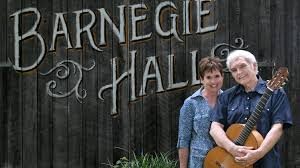 Her latest project, a collaboration with husband Verlon Thompson, a Nashville singer-songwriter of no small reputation is called “Barnegie Hall.”

The 13-week series is airing on Nashville’s public television station and is available for binge streaming on Amazon Prime.

Each episode has Thompson as host sitting down with another Nashville singer-songwriter for a half-hour of conversation and music.

The series, whose guest list includes among others, Rivers Rutherford, Mark Sanders and Tony Arata.

“We wanted to respect the songwriter first, the artist second,” Kalodimos said.

Thompson said, “This show is about people you don’t know,” with Kalodimos adding, “and people you should know.”

As a confirmed music geek (ask anyone in our family), she’s right.

The producing couple financed season one themselves with some help from Nashville Songwriters Association International.

The program is being offered to PBS stations nationwide while funding is being sought for a second season.