It’s been 100 days since there was last a press briefing in the White House press room.

These days it’s used to herd reporters into whenever the Secret Service deems a security threat and the rest of the time, it’s likely where White House staffers go to sneak a smoke.

But, now with the naming of a successor to Sarah Sanders and the swiftly departed Bill Shine, we’ll find out if there will be a return to the good ol’ days or business as usual since 2017. 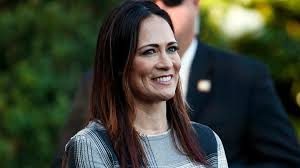 We suspect the latter as Stephanie Grisham will continue as Melania Trump’s mouthpiece, and takes over as both White House press secretary (Sanders’ old job) and communications director (Shine’s old turf).

For the past two years she has been the communications director for the first lady.

And why not pull double – no, make that triple – duty?

If the plan is to continue to ignore the traditional daily press briefing/sparring match, she’ll have more than enough time to handle all three jobs.

Neither of her bosses are particularly inclined to court the press – unless it’s a Murdoch company.

Grisham has been with team Trump longer than anyone currently in the White House, with the exception of Dan Scavino, both of whom started on the Trump campaign in 2015.