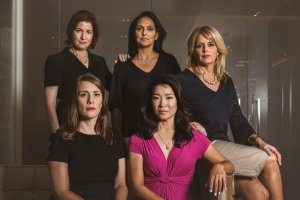 The lawsuit filed last week by 5 NY1 anchorwomen for age and gender discrimination certainly has engendered more than its share of reaction from the public and other members of the press.

But the item about the tribulations of NY1 that we ran across by “New York Post” gossip maven Cindy Adams hands-down takes the cake for murky prose combined with a helping of conspiracy theorizing.

Although we do like the part about talent calling the shots.

Here it is, in full.
This city loves NY1. It’s comfy as a pair of bedroom slippers. Familiar. News, weather, time, headlines, traffic. Hectic becomes our lives and this city, so that’s a constant. Not the usual asinine, inane chatter that clatters up TV. It’s faces we know and trust. We love them.

We understand changing staffers. Younger also equates with cheaper. However, the backstage wrangling — being heard on an open mike — is getting repeated. Everyone treasures anchor Pat Kiernan. But being said is there’s an in crowd. Pat, Jamie Stelter, Annika Pergament share the same agent.

Gossip gossips that they reject anyone who might equal — or, if possible albeit not probable — outshine their favorites. I’m hearing that maybe they even direct shots, segments, studios and in some cases, personnel. Executive producers have been on a rotating wheel.

Many NY1 addicts do not revere the recently added, aimless time-consuming chatter, which tells you nothing new and delays the bare bones of why we tune in to begin with. But I’m not as smart as management so maybe they know something we don’t. I’m just letting them know that beyond just firing a laundry list of anchors whom we’ve learned to respect and trust and then putting in place a chorus of younger, less experienced ones, it’s unsettling. And unfair to us.

Also, letting you know that the internal wrangling is growing external. Seeping out is that friendly NY1 is like distant relatives at a Thanksgiving dinner.