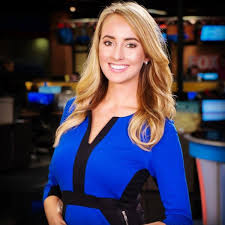 Give some props to Allison Croghan, midday meteorologist at Tribune-soon-to-be-Scripps’ KSTU in Salt Lake City UT.

In the latest (but likely not last) incidence of on-air talent fighting back against the social media boneheads who feel free to insult their appearance, Croghan tweeted out messages that Kelly Leftwich sent to her in which he says “you look fat in blue” before telling her to calm down and suggesting that she is not married because she is “still digging for gold.”

Oh, let’s show some more of what this moron said.

“You do look fat in blue, sorry! I say what people think. Not a ass kisser. You do have a couple of things going for you. Get rid of blue or don’t I am telling the truth. Blue is not your color.

“Your to much for some. Me? I am too…take your comment for example…calm down neighbor you’ll find a millionaire and quit for better pay. Your not married because your still digging for gold.

“By the way I watch Channel 2. Just happened to catch your dress that fit snugly, like you didn’t know that men have radar, and men’s wives. Young and dumb you’ll break a few hearts until you get a wallet full of credit cards.”

Mrs. B would have a field day with this guy’s tenuous grasp of grammar and spelling, don’t you think?

The guy now has lots of time to troll others since, once Croghan released his insulting messages, the real estate company for whom he worked as an independent contractor dumped him.