There were so many people alive on July 16, 1969, to witness the Apollo 11 moon launch. Many watched it live on TV.

Millions of others stormed the Florida space coast to set up camp with coolers, tents and binoculars. 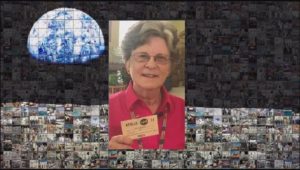 But one Huntsville woman came up with a different way to watch the historic launch.

“I’m Sarah Wilkinson Hereford and I was an impostor for a reporter for Apollo 11,” she told WAFF (NBC).

Hereford is a 1969 grad from Coca Beach High School in Florida who was determined to see the moon launch up close, so she broke the rules.

“I was Chris MacGill with The Associated Press for that one day,” she said.

MacGill, who was the real reporter that day, missed the deadline to pick up the required Kennedy Space Center press pass for July 16, 1969, so Hereford took it instead.

So who was this Chris MacGill? Hereford searched years ago and was unsuccessful in turning up much information.

The AP says MacGill was a well-respected female reporter covering big stories in the United States in the 40s, 50s, 60s and beyond and was never seen without her camera.

Where was she that historic day? The AP is still digging for that answer. So are her nieces and nephews. MacGill died in 2010 and that information may have gone with her.