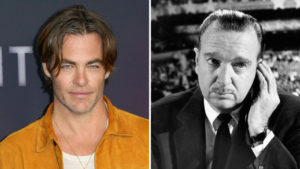 Chris Pine (who did NOT make us forget William Shatner’s Captain Kirk) as Walter Cronkite?

We’re told by Deadline that Pine will tackle the role of the esteemed CBS newsman and former “most trusted man in America” in the upcoming film “Newsflash.”

Could have been worse, we suppose.

Originally Seth Rogen was the choice for Cronkite.

How about Benedict Cumberbatch at Eric Sevareid?

And who will play Don Hewitt, who was Cronkite’s producer at the time?

At one time, it was said to be Mark Ruffalo. But no more.

And a young local Dallas tv reporter who distinguished himself in the stories he did for the national network will undoubtedly be included in the movie.

Who plays Dan Rather?