Cayman 27 will come off the air on Friday, after its owner Hurley’s TV Ltd. announced it is ceasing operations.

Hurley’s TV Ltd. released a statement Wednesday saying the station, which has been on the air for 27 years, will broadcast its final show at 6pm on Friday. 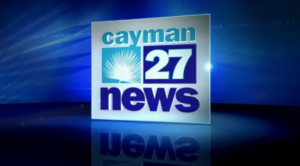 The last show to be aired will be its flagship Cayman 27 News.

Randy Merren, managing director of Hurley’s TV Ltd., said the station had been struggling for the better part of a decade and laid the blame for the impending closure at the feet of regulator OfReg.

“In my discussions with the regulator prior to the acquisition, I made it clear that there were serious financial concerns and I was under the impression that there would be the creation of a ‘must carry’ fee where each subscription TV licensed operator would pay to carry Cayman 27, so they could fulfill their own licence obligations that required each to provide local content.

“The ‘must carry’ fee or Universal Service Fund never came to pass.”

Merren said that earlier this year, Cayman 27 received an OfReg notice of unpaid fees spanning “a couple of years”. According to documents seen by the Cayman Compass, the unpaid fees totalled $103,619.71 and related to outstanding licence and regulatory fees.
Cayman 27 opened in 1992, and was first a division of WestStar TV Ltd., before becoming part of Logic Communications Ltd. in 2014. It was acquired by the Hurley’s TV Ltd. in 2015.