Gene Crane, a legendary Philadelphia broadcaster with a career spanning half a century, has died.

He was 99-years-of-age according to WCAU (NBC). 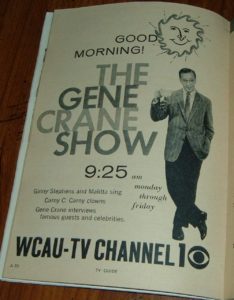 Crane’s career in broadcasting began in 1941 when he worked as an announcer at WJTN Radio while attending Syracuse University in Jamestown, New York. He then served four years in the United States Army in World War II before moving to Philadelphia in 1946, where he worked as a radio announcer for WCAU.

After being let go and working briefly at WIP, Crane returned to WCAU-TV in 1948 when it first went on the air as Philly’s third television station.

From the late 1940s through the 1950s, Crane conducted “Man on the Street” interviews and hosted three children shows as well as a daily talk show.

Crane was also known for his extraordinary versatility.

He could even act. During the 1960s and 70s, Crane appeared in several television commercials. His big break in Hollywood came in 1982 when he played the Mayor of Philadelphia in the film, “Rocky III.”

Crane finally retired from WCAU-TV in 1994, the same year the station switched from CBS to NBC.