Krystal Ball, co-host of the ‘Rising’ Show on the Hill TV said she hasn’t ruled out a lawsuit against Rush Limbaugh for his false claim that she posed for naked photos when she was a teenager. 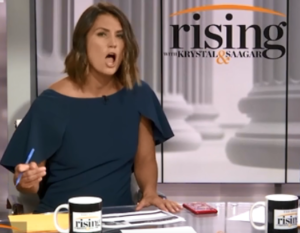 According to Mediaite, Ball unleashed on Limbaugh’s “slut-shaming smear” last week when the conservative radio host made his factually inaccurate, jab at Ball on his show.

While he eventually admitted his remarks were false, Limbaugh has not apologized and continued to refer to Ball as “a hostette, an info-babe on PMSNBC.”

Ball joined CNN’s Brian Stelter to talk about Limbaugh’s weak walk-back, and she began by explaining why she decided to respond to the conservative radio host instead of ignoring his comments. Ball said it was about setting the record straight for her, and that “I didn’t want this particular incident to go unchallenged.”

“Slut-shaming is a very common tactic that is employed against women to sort of shut down their voices, to make them irrelevant, to say that they can’t be leaders,” Ball continued. “I wanted other women to know that you can speak out and you can fight back and people like this can be held, at least somewhat, to account.