The life of longtime Cleveland Cavaliers announcer Fred McLeod was celebrated on Saturday afternoon in a funeral service at Bay Presbyterian Church in Bay Village, according to WKYC (NBC) Cleveland. 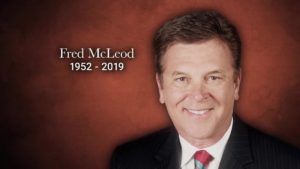 A Northeast Ohio native, McLeod grew up in Strongsville, a Cleveland suburb, and served as the Cavaliers’ play-by-play announcer for 13 years, starting during the 2006-2007 season. Also, McLeod served in the same capacity during the Cavaliers’ 1979-1980 season.

Prior to rejoining the Cavaliers, McLeod spent 22 seasons calling Detroit Pistons games and was a television announcer for the MLB’s Cleveland Indians (1979). Also, McLeod was a broadcaster for the NFL’s Detroit Lions and MLB’s Detroit Tigers.

McLeod was honored with multiple regional Emmy Award wins as a part of the Fox Sports Ohio Cavaliers broadcast crew and was recognized with the National Academy of Arts and Sciences’ prestigious Silver Circle Award in recognition of his lifetime achievements in television.