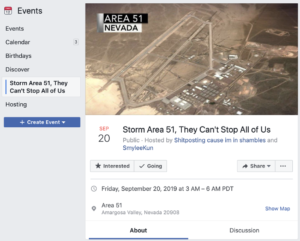 The believers assembled as close as they were going to get to Area 51 outside Rachel, NV, and some are predictably tried to deliver on the promise to “raid Area 51.”

Well, at least they looked like they’re making some efforts anyway.

Inspired by the viral – and highly satirical – Facebook event “Storm Area 51, They Can’t Stop Us All”, about 500 people actually showed up.

And the newsers are making their own efforts to stir it up.

Joe Bartels of Scripps’s KNTV was dispatched to cover and found himself photobombed by something called a Naruto runner, named after the hero of a Japanese manga series.

We’re sure a splendid time was had by all and it filled up a weekend.