Max Goldberg, IJN Publisher 1943-1972, will be posthumously inducted into the Broadcast Pioneers of Colorado Hall of Fame, Class of 2019. 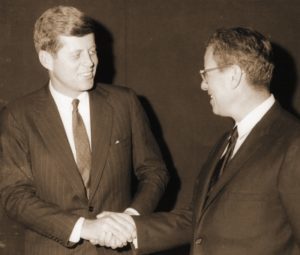 Max Goldberg was the “father of Channel 9,” (KUSA) (NBC) the first network television station in Colorado. He secured the FCC license and organized the business group that bought the station.

Goldberg’s lifelong fascination with media began as a teenager, when he tinkered with  a new gadget called a transitor. He hosted his first radio show at the age of 19 in the early 1930s. He specialized in sports shows and later in public affairs, together with the late legendary Denver journalist Gene Amole.

He founded the Max Goldberg Advertising Agency in 1936, raised the funds that build General Rose Memorial Hospital in the mid-1940s and handled the publicity for the gubernatorial campaigns of Ralph Carr and Edwin “Big Ed” Johnson, and of other candidates on the municipal, statewide and federal level.

When the age of television began, Goldberg was hooked.

As it happens, October 25 was the date of Goldberg’s death 47 years ago.