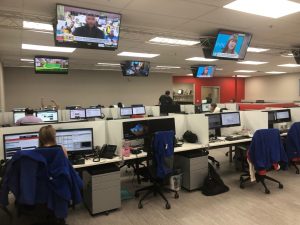 A year after Hurricane Michael forced the staff at Nexstar’s WMBB in Panama City, FL, to move their newscast into the station’s parking lot and their reporting efforts to social media,  station staffers now find themselves operating from a nearly $3 million renovated, state-of-the-art building complete with digital broadcast capabilities.

The newsroom now has capabilities that enable WMBB’s journalists to produce live broadcasts without a traditional control room.

As part of Nexstar’s Digital First Initiative, this creates a “faster to the public” platform.

A more personal part of the recovery effort saw Nexstar employees raise more than $90,000 to assist WMBB staff members who suffered losses during the giant storm.

“Hurricane Michael caused more than $10 billion in damage to the area, and many of our staff members were personally affected—some even lost their entire homes,” said Terry Cole, Vice President and General Manager of WMBB.  “But Nexstar is a family, and our family came to the rescue.  Nexstar and WFLA-TV provided us with the resources we needed to keep covering the story of the hurricane and the recovery effort, and enabled our staff to focus on helping their families, repairing their homes and, in some cases, rebuilding their lives.”