One would think, given these kinds of takes from “journalists.” 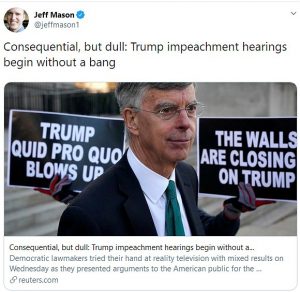 We are so VERY sorry you were bored, Jeff.

NBC News was also concerned over the lack of “pizzazz” while reluctantly acknowledging that there was substance in the hearings. 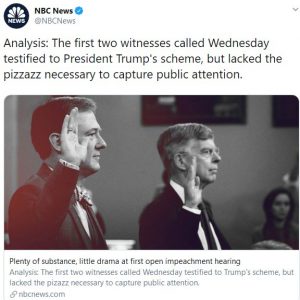 We wonder if Walter Cronkite or David Brinkley or John Chancellor bemoaned the lack of “pizzazz” during the Nixon impeachment?

And as we flipped around the dial, we were somewhat bemused at how Fox News structured its graphics – evidently comfortably ensconced in the White House impeachment war room 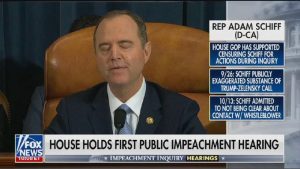 Wonder where the graphics folks stand on the whole impeachment thing?

And then there is the contrast between two cable networks’ coverage. 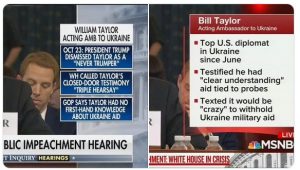 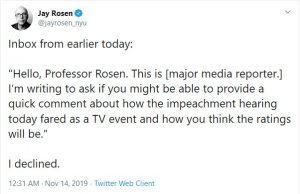 A very heartfelt hooray for you Professor Rosen.

We might have been inclined to send an expletive-filled reply, but you kept it gentlemanly.

We have to wonder at so-called journalists for whom this is just another episode of “Survivor” or “Big Brother.”

And we think they might better serve their careers (and those of us who see this as living history) by having themselves assigned to doing recaps of “Dancing With the Stars.”

Day two of the public hearings are coming up in just a few hours from this writing.

Let’s hope the news outlets, the cable boys in particular, can do a better job of focusing on the seriousness of the matter at hand….and commit some actual journalism in the process.