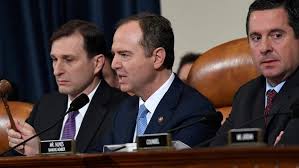 We can look forward to three days of witnesses beginning today starting with Lt. Col. Alexander Vindman later this morning.

He’s the top Ukraine specialist on the National Security Council who listened in on the July 25 telephone conversation in the White House Situation Room and reported his concerns about the president’s mention of political investigations to the top NSC attorney.

He’ll be followed by Jennifer Williams a foreign service aide detailed to Vice President Pence‘s office who listened in on the July 25 call between Trump and Zelenskiy.

She made headlines this past weekend when she became the target of a furious Twitter barrage out of the White House.

There will be an afternoon session as well.

We’re not going to obsess on ratings for the hearings.

The treatment of them by many media types as just another reality show we find simple-minded and off the mark.

But, for the record, a little more than 13 million people watched the first day of the public hearings in the impeachment inquiry against Trump, according to Ben Mullin of The Wall Street Journal.

We’re not about to compare how it fared compared to other Washington spectacles of recent years.

This proceeding is far more serious than any of them

As you might expect, Fox News drew the most total viewers with 2.9 million, followed by MSNBC with 2.7 million.

So the two most politically suspect networks came in Nos. 1 & 2.

We don’t seem to live in a country anymore.

Rather, we appear to live in a series of silos (see next story).

And what does this say about the very first cable network dedicated to 24/7 news?

CNN came in behind ABC and CBS (2 million each) with CNN at 1.9 million.

NBC brought up the rear with1.7 million.

Many more might have watched on C-SPAN or online.

In addition to today, this week’s hearings will see two sessions tomorrow (Wednesday) and one session on Thursday morning.

Whether this week sees the last of the public hearings remains an open question.