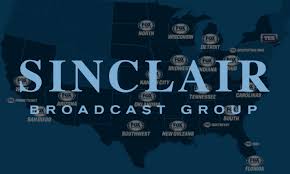 Just a few months ago, Sinclair Broadcast Group was riding high at $60 a share.

These days, the price is hovering in the $35 range and the folks at Hunt Valley, while not hitting the panic button, may be hearing footsteps, as it struggles to overcome this six-month low.

And while, when the clock turns on 2020, investors in Sinclair Broadcast Group may be pleased that the company’s shares are higher than they were a year earlier (in the 40’s in January 2019) why the company’s stock has been on a roller coaster ride?

One take being offered is that the company’s massive acquisition of the Fox Regional Sports Networks effectively transformed Sinclair into a sports-oriented company.

Sinclair’s exposure to its RSNs is now higher than the company’s book value.

And the future of RSNs is not the healthiest.

Over the summer, DISH dropped Sinclair’s RSNs and DirecTV kept them.

That is not a good sign for the future of RSNs as providers could likely find they are better off without them and the retrains headaches that inevitably follow.

And that, in turn, does not bode well at all for Sinclair’s nearly $15 billion dip into RSN acquisitions.