The folks at Gray Television would like you to believe this is a good thing – that somehow viewers will be better served with one less independent news gathering operation in the market. 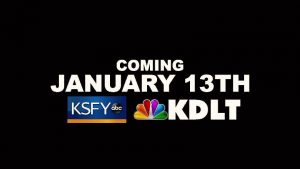 Months after KSFY owner Gray Television acquired KDLT, both stations have shared a video online that includes their combined logos and teases the date Jan. 13 for an announcement.

Back in September, when Gray closed on the KDLT purchase after the industry-friendly FCC issued a first-ever waiver that allowed a top four station in a market to purchase another.

Since then, the FCC has been forced to revert to more sensible rules because of an appeals court decision.

But in Sioux Falls, the genie is out of the bottle.

That waiver came because Gray promised, with a straight face and a hand to God, additional newscasts on both stations once they got their hands on both.

We’ve no doubt that newscasts will be added.

We’ve also no doubt that personnel cuts are coming to the combined news operation to maximize profits.

And there is one less independent news voice in a market that sorely needs all the diversity it can get.