It’s evidently a bit of a bitch when you are a Republican Senator facing an uphill re-election when the topic of the day is impeachment. 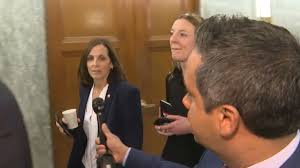 He had a simple question: Would McSally consider new evidence that would be entered in Mr. Trump’s impeachment trial.

He received an interesting answer.

“You’re a liberal hack. I’m not talking to you,” McSally said.

“You’re a liberal hack,” McSally repeated, before running into an office.

Running. Into her office.

“He was just asking the question of the day!” Jake Tapper told Wolf Blitzer. “McSally just calls Manu Raju, respected widely on Capitol Hill by Democrats and Republicans, calls him a nasty name.”

“Oh my God,” Dana Bash could be heard remarking in the background.

Presumably, McSally is only willing to subject herself to the hard-hitting questions lobbed by the Three Dumbest People on Television© who slouch on the “F&F” kurvy kouch

Raju will survive the insult.

But she is fundraising from the “kneejerk media haters” community over the exchange, so there’s that.