Here we are, two and a half days after the latest Democratic debate, and still not a peep from CNN about debate moderator Abby Phillip’s highly unprofessional moment.

Candidate Bernie Sanders was pressed by Phillip, who asked him: “I want to be clear here. You’re saying that you never told Senator Warren that a woman could not win the election?”

“That is correct,” he replied. 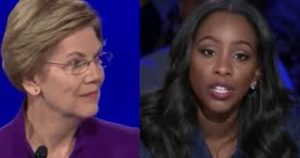 Phillip then promptly turned to candidate Elizabeth Warren and asked, “What did you think when Senator Sanders told you that a woman could not win an election?”

The lack of a followup question to Sanders about an endlessly-reported exchange was glaring enough.

But for Phillip to turn to Warren and essentially say, “Don’t listen to his answer. I don’t believe it,” was about as bad a sequence as we’ve ever seen.

The Poynter Institute, a journalism think tank, wrote Wednesday that it was a stunning moment — “stunning it its ineptness, and stunning in its unprofessionalism.”

Phillip’s question to Warren “was tantamount to calling Sanders a liar, and that certainly should not be a moderator’s job, especially when Philip had the opportunity to ask Warren directly if Sanders ever told her that,” Poynter said. “If Warren said yes, then and only then should Phillip have asked what Warren thought.”

And the take on the Sanders-Warren imbroglio by “Rolling Stone” reporter Matt Taibbi was nothing short of a flaying of all of CNN.

After the debate, Trump fans online were in full schadenfreude mode, crowing about how “the left” finally understood that CNN really is fake news. Overall, #CNNisgarbage trended and #fuckCNN wasn’t far behind.

If the network doesn’t see trouble in this, it’s delusional. [Voters] pay more attention to media manipulations, and it doesn’t get much more manipulative than punching above the facts to advance transparent political narratives, which is a new and accepted habit in the commercial news landscape.

We’ll find out in Iowa and New Hampshire what Democratic Party voters believe about that Warren-Sanders meeting, but that grimy story pales in comparison to the bigger picture: Episodes like this are why people hate the media.

On second thought, it might be in CNN’s best interests to keep quiet about Phillip’s awful performance.

Maybe it will all blow over in our attention span-challenged age.