One leftover piece of business from Monday’s Second Amendment rally in Richmond, VA, a rally held, most thoughtfully, on Rev. Martin Luther King Day, was one of those bits that might usually end up on someone’s blooper reel. 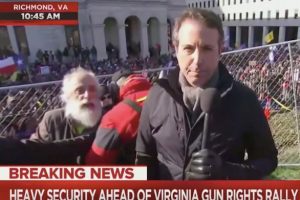 A live shot for MSNBC reporter Gabe Gutierrez on Monday went sideways when a heckler started blasting him with obscenities at the Richmond rally.

“Y’all a bunch of f—ing liars, you lying pieces of s—… f— you!” a bearded man, resembling a skinny mall Santa, yelled in the background as Gutierrez signed off.

On second glance “skinny mall Santa” is a rather generous description for the deep thinker.